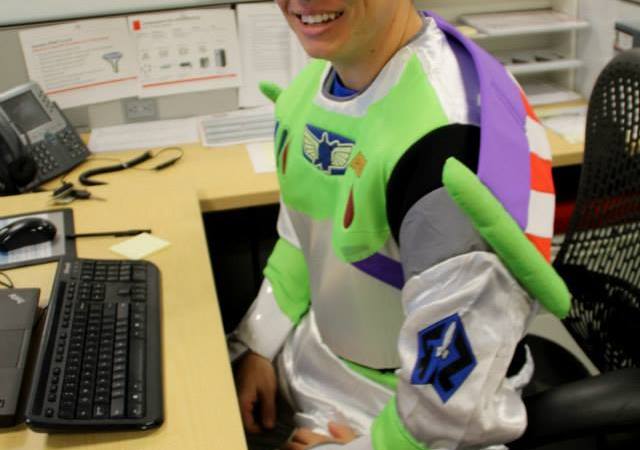 Hard at work or too busy being the cutest little Buzz Lightyear out there? Both! 25-year-old Rodd Ganss, won multiple awards for a costume he wore to a contest held at his work.

The noble awards include: Most Likely To Be Squeezed, Mr. Cute & Adorable 2016, Cheek Pincher, Tween Sensation and Most Likely To Cause Cuteness Overload.

Ganss’s boss, Patty Campbell, was blown away by the awards Ganss received not only from within the company, but from strangers, YouTubers and Miss Cindy Lou’s Day Care Class.

“His cuteness was a bit distracting in the work place but it was only for a day so we managed,” Campbell said.  “I thought my Pomeranian was drop dead adorable but Mr. Ganss really changed my mind!  Have you seen those dimples?”

Ganss is of Irish, Scottish, and German decent which is now being classified as “the cutest genetic make up” by the Cute Pie Coalition.  Between his flowy, dirty blonde hair, great posture, dimples and slanted smile, it’s impossible to not call him cute.

Ganss was unable to be reached for commenting because he recently embarked on his “I’m Cute and I Know It” tour which will cover all 48 continental states.  Tickets were available for $250 each but have already been sold out.